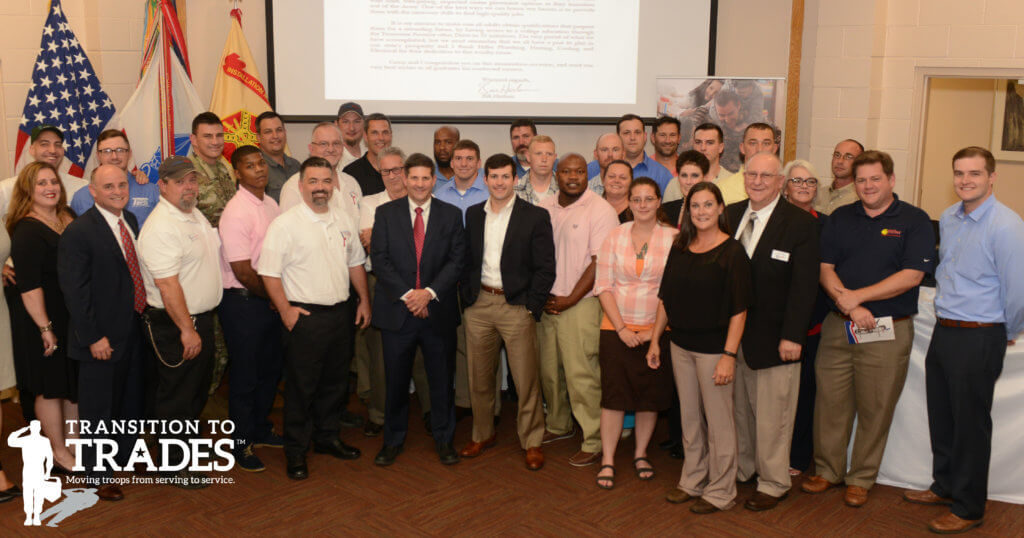 Transition to Trades, launched on July 5, 2016, allows separating soldiers the opportunity to attend Total Tech trade school (a subsidiary of Hiller, LLC) to learn valuable technical career skills while remaining active duty in the U.S. Army. Total Tech offers a unique approach to technician training through classroom and hands-on laboratory instruction in a 15,000 square foot, state-of-the-art facility. As part of the program, students are guaranteed an employment interview at a Hiller branch location of their choosing. Soldiers desiring to return to their hometowns are provided key industry contact information to aid in employment searches in those respective areas.

Since its inception, Transition to Trades has proudly graduated 156 members from the HVAC, Electrical, and Plumbing trades. Of those graduates,103 soldiers are now employed full-time in the industry, while 23 have reenlisted or gone back to further their education.

Transition to Trades, through its partnerships with PRAXIS S-10 and PriceFixer.com, a national success college and network for contractors, has now expanded to include placement opportunities with over 150 contractors across the United States. With new Army Permissive TDY (Temporary Duty) regulations, soldiers are now permitted to move between the states to attend CSP programs, like Transition to Trades. To accommodate these additional soldiers, the program has plans to expand its trade school significantly over the next year. These changes will allow soldiers from across the United States to participate in the program and relocate to nearly any area of their choosing for full-time employment upon their graduation.

The fourth graduation ceremony, held on Thursday, August 10 in the Army Education Center at U.S. Army Garrison Fort Campbell, KY, marked the completion of the May, June, and July classes for the Plumbing, HVAC, and Electrical trades. The transitioning soldiers were awarded graduation certificates in front of an audience of peers, family, members of the Army, associates from Hiller LLC and Total Tech LLC, government representatives, and the press.

“Today, I would like to recognize and honor Hiller Plumbing, Heating, Cooling, & Electrical, Total Tech School, PRAXIS S-10, and the U.S. Army Career Skills Programs for their continual efforts to end veteran unemployment in our region,” stated U.S. Congressman Marsha Blackburn in a statement to Congress. “They have helped more than 150 soldiers stay safe, gain an income, and acquire insurance”, she continued, “This is life changing for military families and our community”.

During his remarks to the crowd, program graduate Sergeant Major Bryan K. Witzel described the uncertainty and stress many soldiers face during transitional periods and how the Transition to Trades program offered solace and stability for his family.

“The military transition assistance program is good, however, the enduring support of the civilian community and businesses that is what makes these programs great,” remarked Witzel. “The Hiller and Total Tech teams take great strides to provide personalized assistance to each person”, he continued, “and I am proud to tell you that because of that assistance, I chose a new career that provides stability and security for me and my family”.

Not only are these deserving veterans receiving full-time employment opportunities, but they are truly thriving in these roles as a result of the strong values and work ethic instilled upon them during their service in the Army.

“Many Transition to Trades graduates are now working with us at Hiller”, remarked Jimmy Hiller, founder and CEO of Hiller Plumbing, Heating, Cooling & Electrical. “Their professionalism, dedication to the pursuit of excellence, and integrity have already proven them to be valuable assets to our teams across the region,” he continued. “I am so thankful for these talented men and women, and I can only imagine that other employers will share in this gratitude.”